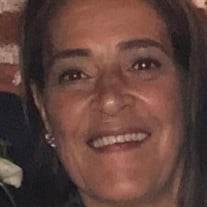 Cynthia Yvette Ward was born August 23, 1953, to the late Martha A. Pryor and Thomas H. Ward, in Richmond, Virginia.  She attended Carver Vocational-Technical High School.  She was also a part of New St. Mark Baptist Church for many years. Cynthia lived in Baltimore, Maryland since 1956.  While attending Carver she met high school sweetheart Tony Branch and had her first son, Khary Erland Haley Ward born on July 23, 1978.  A few years later she met her husband Ulysses S. Grant, and had her second son, Kenny Ulysses Grant, on October 21, 1980. Years later after graduating from Carver Vocational-Technical High School Cynthia worked for the City of Baltimore doing payroll.  Cynthia worked for the City of Baltimore from 1988 to 1995. Cynthia then went about adding more to her repertoire.  Acquiring knowledge and the ability to become an on-site Assistance Living Associate.  Helping sick and elderly individuals with their day-to-day needs.  She then years later went through training with the Aramark company.  She did work providing food and catering services for local businesses and universities.  Cynthia left the workforce in 2009.  She had then started assisting her son Khary with raising her first grandson Khamron Haley Ward, born September 6, 2006, the child of oldest son Khary and daughter-in-law Lakisha Furnanders.  She was a devoted all in Grandmother to Khamron (her true light, pride, and joy).  Cynthia did have the pleasure of meeting and spending time with her second grandson Hudson Magic Goldman-Grant, born July 23, 2019 (the same day as his Uncle Khary), and her third grandson Cooper Moon Goldman-Grant, born August 17, 2021.  Both children of her youngest son Kenny and his wife Lauren A. Goldman-Grant. She leaves to cherish her memory, two sons Khary E. H. Ward and Kenny U. Grant.  Three gorgeous grandsons, Khamron H. Ward, Hudson M. Goldman-Grant, Cooper M. Goldman-Grant. A daughter-in-law Lauren A. Goldman-Grant. One sister Doris Lawson. A brother-in-Law Sidney Lawson. One brother Thomas Ward. And a host of other relatives and friends.

The family of Ms. Cynthia Yvette Ward created this Life Tributes page to make it easy to share your memories.

Send flowers to the Ward family.