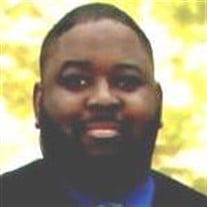 Earl Christian Jones was the third of four children born to Elliott C. and Jonell W. Jones on February 21, 1978. In the past several years he has suffered from various illnesses. Earl left this world suddenly on the early morning of Thursday, November 9, 2017, at the age of 39.  On May 28, 2016, Earl married Jennifer Head, in Detroit, Michigan. As newlyweds, they recently relocated to Baltimore, Maryland. Jennifer was Earl’s constant caregiver and support. She stood by his side until his passing.   Those who knew Earl know what a charismatic and genuinely fun loving person he was. From a young age, Earl was active in the Episcopal Church as an acolyte. He was alos a natural athlete. He played football, baseball and soccer. He received special recognition for playing football and baseball at Mumford High School in Detroit, Michigan. Earl was an active member of the high school choir. He was an avid movie buff and he dreamed of opening his own restaurant one day. Along with all the attention he gave his children, he purchased clothing for them that cause them to become known as the “Polo Family.”   After graduating from Mumford High School in 1996, Earl attended Tennessee State University. He made a career in telecommunications and customer service at Comcast Cable in Detroit, Michigan.   He loved listening to music from the 60’s, 70’s and 80’s and contemporary genres. Often you could find him singing along with any artist from the Temptations to Rick Ross. He passed down to his children his appreciation for “good” music.   In addition to his wife, Jennifer, mother-in-law, Lakshimi Head-Hancock and stepsons, Kristofer and Kameron Bradford, Earl leaves to cherish his memory, his parents, Elliott C. and Jonell W. Jones; five children, Jocelyn Monique, Elijah Caleb, Danielle Elise, Solomon Isaiah (Weeble) and Isaac James; his four sibling, Ardenia, Lori (Lydell), Janice, and Joy (David); nieces, nephews, Ray Casper, Jasmine Julian, Lorence, Lynell, Lorin, David James, Jayda Joy, and Daisy; his godparents, Priscilla Duncan, Loutrell Johnson, Orion Jones; aunts, uncles and a wealth of family and friends.

Earl Christian Jones was the third of four children born to Elliott C. and Jonell W. Jones on February 21, 1978. In the past several years he has suffered from various illnesses. Earl left this world suddenly on the early... View Obituary & Service Information

The family of Mr. Earl Christian Jones created this Life Tributes page to make it easy to share your memories.

Earl Christian Jones was the third of four children born to Elliott...

Send flowers to the Jones family.