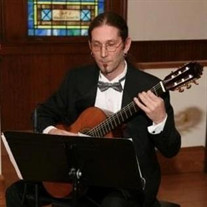 Eric John Seidl April 24, 1970 - June 10, 2021 Friends, family, students of my Dad, fellow musicians, and people he met in passing who he left a magnate mark on - it is with the heaviest of hearts that I announce that my father Eric J. Seidl passed away suddenly and very unexpectedly last Thursday - June 10, 2021 around 1pm. Eric was born in Baltimore, Maryland in April of 1970 to Carol Ruth (nee; Behr) and Joseph John Seidl. He spent his life in Charm City - Graduating from Archbishop Curley and going on to the Prestigious Peabody Conservatory at Johns Hopkins University where he triple majored in classical guitar. The man was an actual musical virtuoso. Fluent in piano, flute, classical and electrical guitar, and so many more instruments. He took his passion for music and poured his love for it into other humans as often as possible. Teaching Guitar at Towson University in addition to private classes Eric taught guitar for over two decades, leaving his music to play on in hundreds of others forever. Being a musician his entire life, Dad played in so many bands and with so many musicians. From Phatasmagoric in the 80’s to the Roanoke Symphony Orchestra in the '90's , to Motorocket in 2007, to touring with Richie Sambora in 2009. While Classical Guitar was his first love, rock’n’roll was his mistress. He loved gangster movies, poop jokes, fluffy animals, reading - he was the eternal student, painting, playing guitar, studying spirituality and religions, tormenting me at every possible opportunity, leather pants, black box hair dye, chocolate and literally any snack, loving on his grand baby and helping others. Most of all, though, he loved being my dad. There was no such thing as too many Disney movies, or too many times watching grease, or too many times going to the mall. No such thing as too big of a mistake or too low of a grade. Eric was patient, kind and loving as a father. Being my Dad, was his favorite thing and he would tell you his greatest accomplishment. There was never a person - friend, acquaintance, stranger who he wouldn’t help. Eric was preceded in death by his Mother and Father. Eric is survived by his eldest Daughter Hope White, granddaughter Winnie White, and son in law Josh White as well as his daughter Chloe Taylor Thorne and her husband. There will be a Celebration in honor of Eric’s life and legacy on Saturday June 26, 2021 from 12-4pm at Emerald Tavern in Parkville, MD. 8300 Harford Road, Parkville MD 21234. My Dad wouldn’t want a stuffy funeral service - he would want you to have a Jack and Coke and tell stories about him. So let’s do that. I would love to hear any stories you have about my dad - as well as any photos or music you would like to share. Please note - there are people who will be attending who are too young for a vaccine and who are immunocompromised - so please if you are not fully vaccinated bring a mask and practice social distancing out of respect. Thank you. If you would like to send flowers to Eric's Family - Please send them to Hope White at 707 York Road Apartment 6213 Towson Maryland 21204. If you would like to send a meal to make things easier on the family during this time of grieving - you can use this meal train link: https://mealtrain.com/4qo9r2

Eric John Seidl April 24, 1970 - June 10, 2021 Friends, family, students of my Dad, fellow musicians, and people he met in passing who he left a magnate mark on - it is with the heaviest of hearts that I announce that my father Eric J. Seidl... View Obituary & Service Information

The family of Mr. Eric John Seidl created this Life Tributes page to make it easy to share your memories.

Send flowers to the Seidl family.