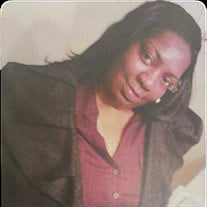 Marketta Walker, born December 8, 1975, is the 6th of 9 siblings. Born to parents Larry and Doreen Walker, Marketta was always an upbeat and fearless child.  Affectionately called “Granny,” by those close to her, Marketta was a born nurturer, confidant and Shero to so many in her life. She always had a funny story or a word of inspiration to offer those in her reach. Marketta’s early life would be colored with various traumas, from suffering the loss of her mother Doreen at age 8, enduring multiple layers of abuse to becoming a mother at the young age of 13. Through all of life’s trials, Marketta always did her best to overcome any obstacle put in her way.  Marketta’s adult life would be filled with love and an ever growing immediate family. Unfortunately, she would experience some substantial loses also. First the murder of her brother “JR” the week of her 25th birthday in 2000. And secondly the death of her first husband Anthony in 2008. Marketta would rebound in 2011 marrying Reginald Henderson .  Reggie and Marketta’s love would endure many things, in addition to Marketta falling extremely ill in 2015, which would be the precursor to her eventual demise. Luckily a legacy like Marketta’s is indestructible. Her younger siblings remember her as their protective guide who would walk them to and from elementary school. To her older siblings she was their rebellious little sis who always had something to say and their backs, at the end of the day. To her husband and sons she was the glue that held everything and everyone together. To her cousins she was, “Big Ketta” - the life of the party. To this world she was an irreplaceable force that can never be replaced. Marketta’s life was filled with love and celebration. She is survived by a tribe that is determined to keep her life and light alive eternally. She leaves behind her children, Demetrist Walker, Marquette Rodgets, Marquies Walker; Bonus children, Corey Henderson, Jessica Henderson, Reginald Henderson Jr., Shardea Henderson; Godson, Javonte; Stepmother, Dazarine McCain; Godmother, Barbra Wilerson;  Surviving Siblings, James Kite, Angel Kite, LaMania Walker, Shanika Graves, Larry Scott-Walker, Latasha Walker, Tamika Walker; Deceased Sibling, Larry Walker “Jr”; Siblings In– Love, Melinda Walker, Sharonda Hunter, Jasper Hunter; 11 nieces, 11 nephews, 9 great nieces, 9 great nephews, Best friends, Tracey Phillips, Gloria Winfield.

Marketta Walker, born December 8, 1975, is the 6th of 9 siblings. Born to parents Larry and Doreen Walker, Marketta was always an upbeat and fearless child.  Affectionately called &#8220;Granny,&#8221; by those close to her, Marketta was... View Obituary & Service Information

The family of Mrs. Marketta Lorraine Walker-Henderson created this Life Tributes page to make it easy to share your memories.

Send flowers to the Walker-Henderson family.